Hairpin turns, jumps, high-speed crashes – athletes traveling downhill on skates at 50 mph – 12 races, 8 countries, 3 continents: that’s an average season of Red Bull Ice Cross and Extreme Iroquois! Back in 2015, Michael Iulianello, better known as Iggy, was an intern at Iroquois Group, and a student and hockey player at St. Bonaventure University. That’s when he first heard about Red Bull Ice Cross.  After racing on his first ever downhill ice course, Iggy was hooked. Now the Iroquois logo races down each course with Iggy as he proves what hard work and determination can accomplish. In conclusion, insurance an extreme sports can and do go hand in hand.

American Michael Iulianello (left), Michael Urban of the Czech Republic, and Scott Croxall of Canada. All on the winners podium after a Red Bull ice cross race in Igora, Russia, on Jan. 26, 2019. 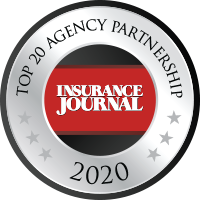